The Apple Watch's Greatest Impact May Be Incremental Change in Lifestyle

I got an Apple Watch for Father's Day. It was a complete surprise because my sons were heavily involved in the gift choice, and they kept absolutely silent about it in spite of many opportunities to spoil the surprise.

I was prepared for a few aspects of Apple Watch functionality, such as the translation of notifications on the iPhone to the Watch. But one thing I was not prepared for was the effect that Apple's Activity app is having on my lifestyle.

Some of you know that I played hockey at a competitive level through college. This meant that I trained like a professional athlete until my early 20s. I worked as an IT consultant on Wall Street after I graduated, and resumed serious athletics in my early 30s, this time as an amateur and college ice hockey official.

As a result, I am no stranger to hard physical training or trying to maintain a reasonable diet. This website (Operation Gadget) became a venue for a lot of discussion about the use of heart rate monitors and other fitness gadgets to measure athletic performance in the late 1990s.

For many years I've thought that the best way to train was to measure all of your workouts with as much detail as possible. This meant wearing a heartrate monitor, such as a Polar S-Series or the RCX5 that I wore as a wrist watch for the last couple of years before I got the Apple Watch.

The Apple Watch has showed me almost immediately that I didn't have a good sense of my physical activity level on the rest days between workouts, and, my activity level on those rest days was lower than I thought it was. Perhaps this shouldn't have surprised me, since my work keeps me at a desk for most of the day, even on days where I am doing pretty strenuous workouts.

During the time I was learning the less obvious features of the Apple Watch, I was listening to many different podcasts by other technologists who had become Early Adopters sooner than me. One of those people was Jim Dalrymple of The Loop.

Jim has written about how he lost 40 pounds as a result of noticing the effect that walking had on his physical health (see the section "Fitness: information is power") thanks first to HealthKit on an iPhone 6, and then the Activity app on the Apple Watch. He followed this up in a second article on his site, which talks about what works and doesn't work for him in terms of motivation.

Jim has become a real inspiration for me, not because I can do what he did and achieve the same result1, but because he took a device that came into his life for work purposes (the Apple Watch), observed everything it did, and in the process discovered a dimension of the performance of the Watch that revealed something about himself and his motivation. This lead to a major quality of life improvement. I could learn a lot from doing the same sort of diligent review of the fitness apps on the Apple Watch.

After continuing to read and listen to all the information I could get about Jim's weight loss, I promised myself that I would focus my use of the Apple Watch on the Activity app, and complete the three rings (the major daily goals in the Activity app) on every day I possibly could. Recently, I've achieved all three goals for 10 days straight, and in spite of missing out on active calories one day this weekend, I've completed the rings on 16 of the last 18 days. 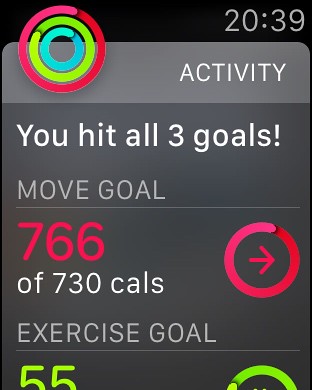 This is making me much more active on the days between my heaviest workouts, and has certainly made me more aerobically fit. However, as I expected, I haven't lost very much weight so far.

Hearing about Jim's progress, and factoring in my own new-found commitment, leads me to the conclusion that the Apple Watch's greatest impact may be the incremental changes in lifestyle that Watch users experience by being open to following the recommendations of the Activity app, and making a significant personal commitment to following those recommendations.

1I don't think I can achieve what Jim Dalrymple achieved simply by following the recommendations of the Activity app. I am a more conditioned athlete at this point in my life than Jim was when he began his miraculous losing streak. So the weight I want to lose probably won't be lost at Jim's high rate of initial loss.